Showing posts from November, 2014
Show All

Value of colour: shade and Tint 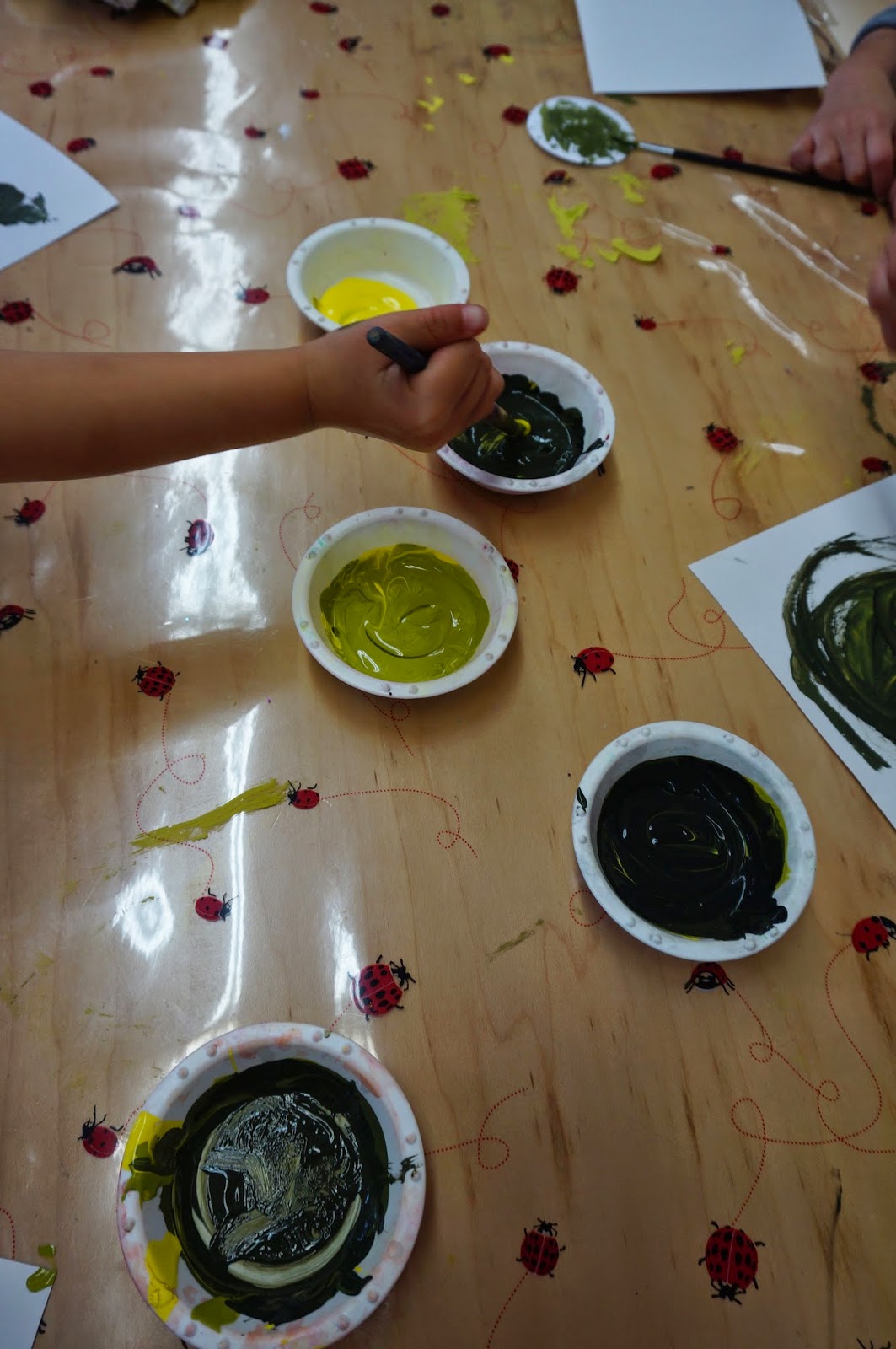 Shade: when black is added to the colour TInt: when white is added to the colour monochromatic painting Last week we began looking at Value of colour: it is when colour becomes lighter or darker.  The children asked: how can we make colour darker or lighter?  We first experimented with adding white and black to the colours to see what will happen.  The children predicted that black might make the colour darker and white will turn the colour lighter.  After playing around with mixing various colours the children got to paint with the mixed colours and chose how much more or less of white and black to use.  They noticed that as they add more or less the value of the colour also changes.   Julia discovered a tint of red: pink  Last Friday the children made monochromatic paintings to see the contrast between the original colours and the tint/shade mix.   Pink!!! Allye: Mine is lip balm pink Nico: Mine is a flower pink
2 comments
Read more 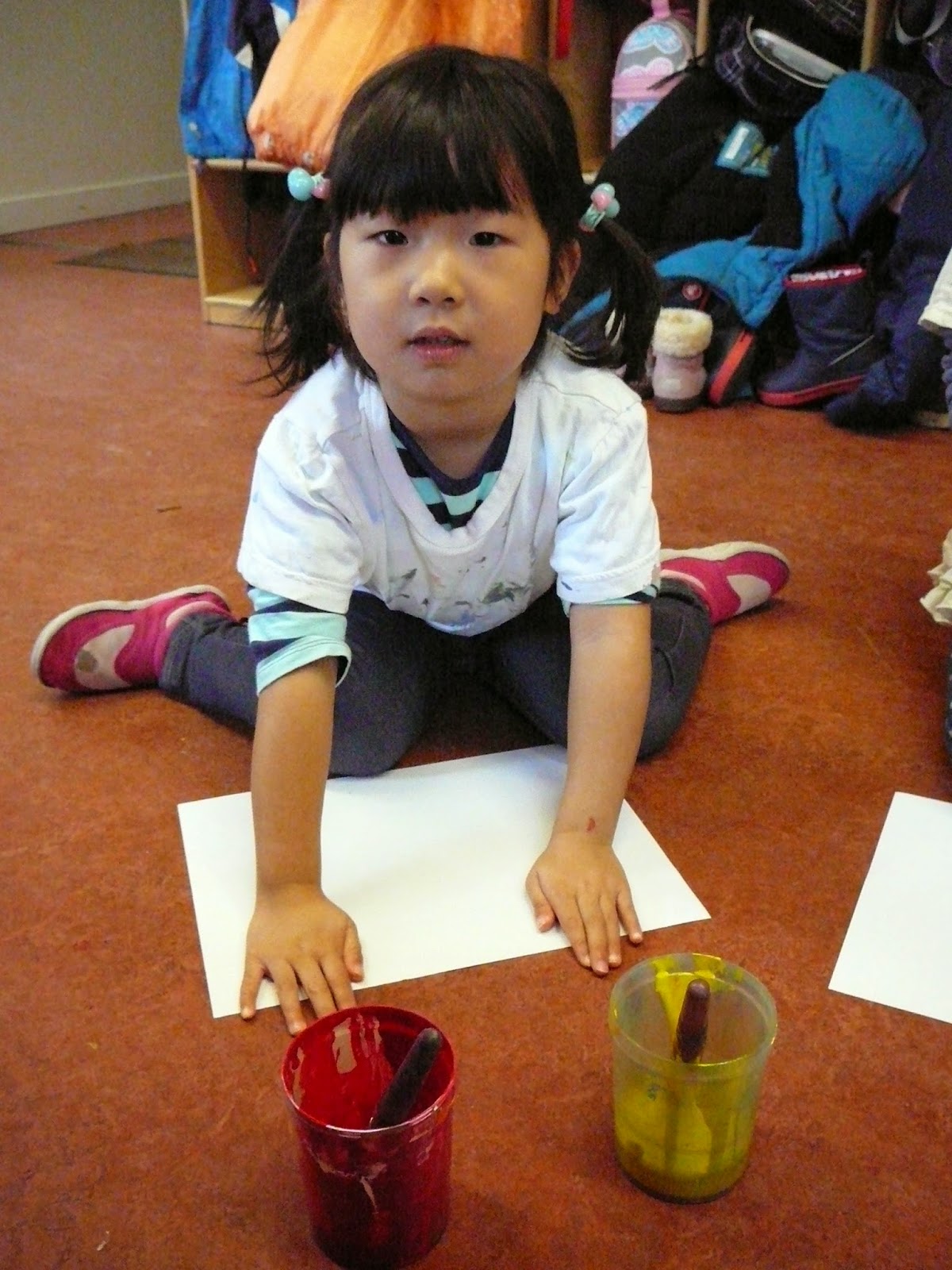 To review our Secondary Colours we read the book Mouse Paint and created our own mouse paint illustrations using hand prints. The children were asked to pick a secondary colours they want their mouse to be. Then, they were asked to show which 2 primary colours they need to mix to get that secondary colour they want. As we were painting the children noticed how the colour purple became darker when we added more blue and brighter when we added more red. Matthew suggested that the orange looked more red maybe because there was more red in the mixture.  I think these observations are a great way to start our discussion on tint and shade of colours. After the paint dried I helped the children add the eyes, ears, tail, and whiskers of their mice. Elaine made orange by mixing yellow and red "My purple is dark" Matthew didn't want to show his face "I just made purple!"
2 comments
Read more 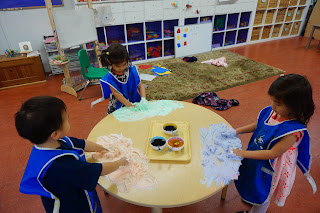 coloured shaving cream experiment In this grouptime we addressed the children's questions on mixing colours: Nico: "How do you get green?" Damon: I got orange. I don't know how... "I mixed red and blue to get purple" We began by recalling the primary colours and then we made a prediction chart to show what might happen if we mix 2 primary colours.  For fun we used shaving cream and added food colouring to see what colours we get when mixing the primary colours. We found that we can make Secondary colours by mixing 2 Primary colours. Yellow + Red = Orange Red + Blue = Purple Yellow + Blue = Green Nico was double checking our predictions
2 comments
Read more

A Poppy is to Remember 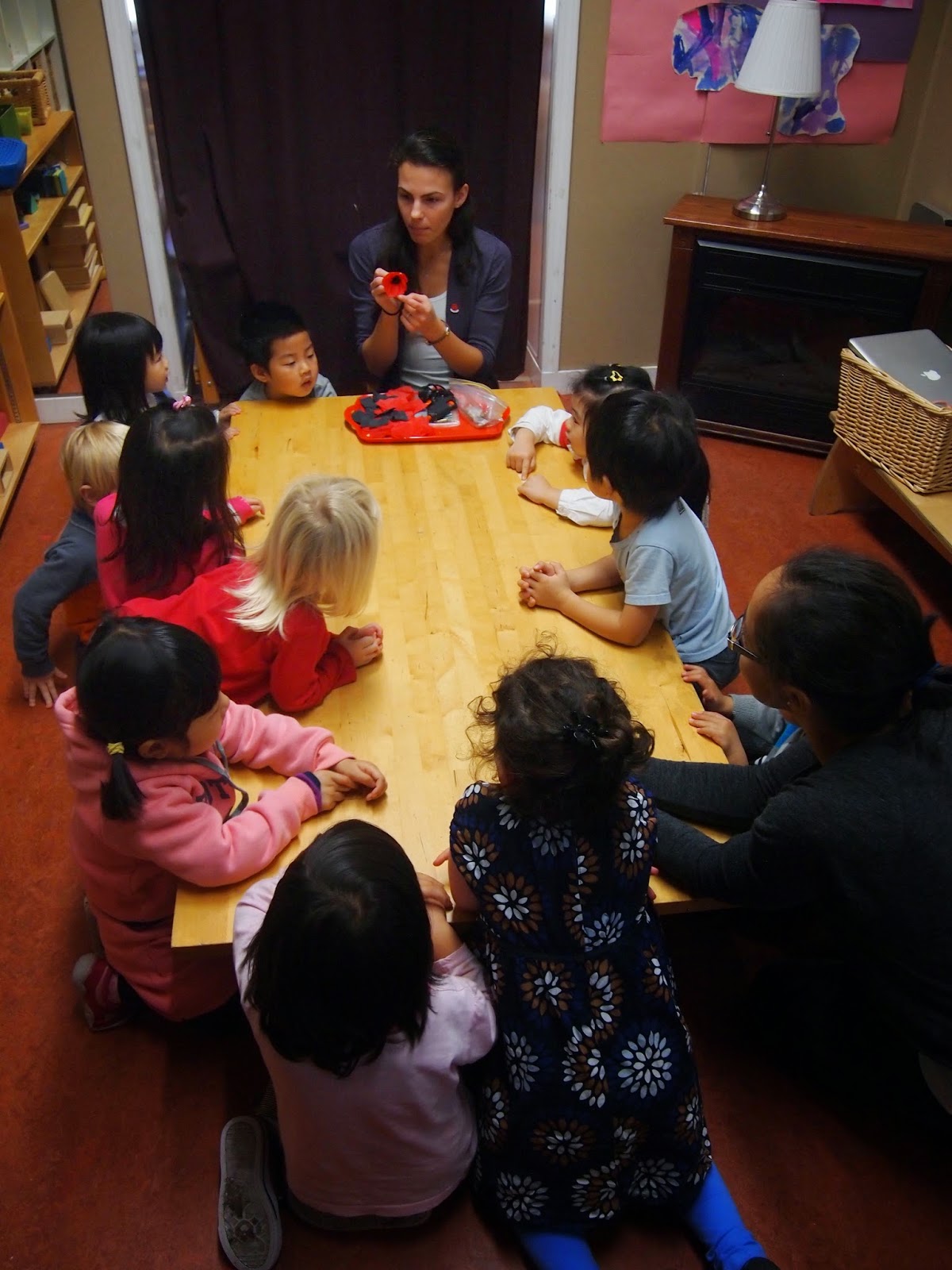 The Earth, Wind, and Water group worked together on a Remembrance Day project. " In Flanders fields the poppies blow...." First the children read a story to help understand the symbolism of the Poppy on Remembrance Day. Lucas seem to know about the story behind the Poppy: "it's because people died and it's sad". As we read the story, we discussed the different feelings and emotions during a time of uncertainty like the Great War. The children thought about the sad and fearful soldiers and also the joyful families when they were reunited when the war was over. With the help of AnaMaria and Mary, the children made Poppy Pins they can take home. And then, using their ideas in our discussion, the children helped me write a poem called:      RED IS TO REMEMBER Red is the sadness Red is the fear Red is the blood that gave us some tears Red is the love Red is the hug That brought happiness to all the land Red is the poppy Red
4 comments
Read more 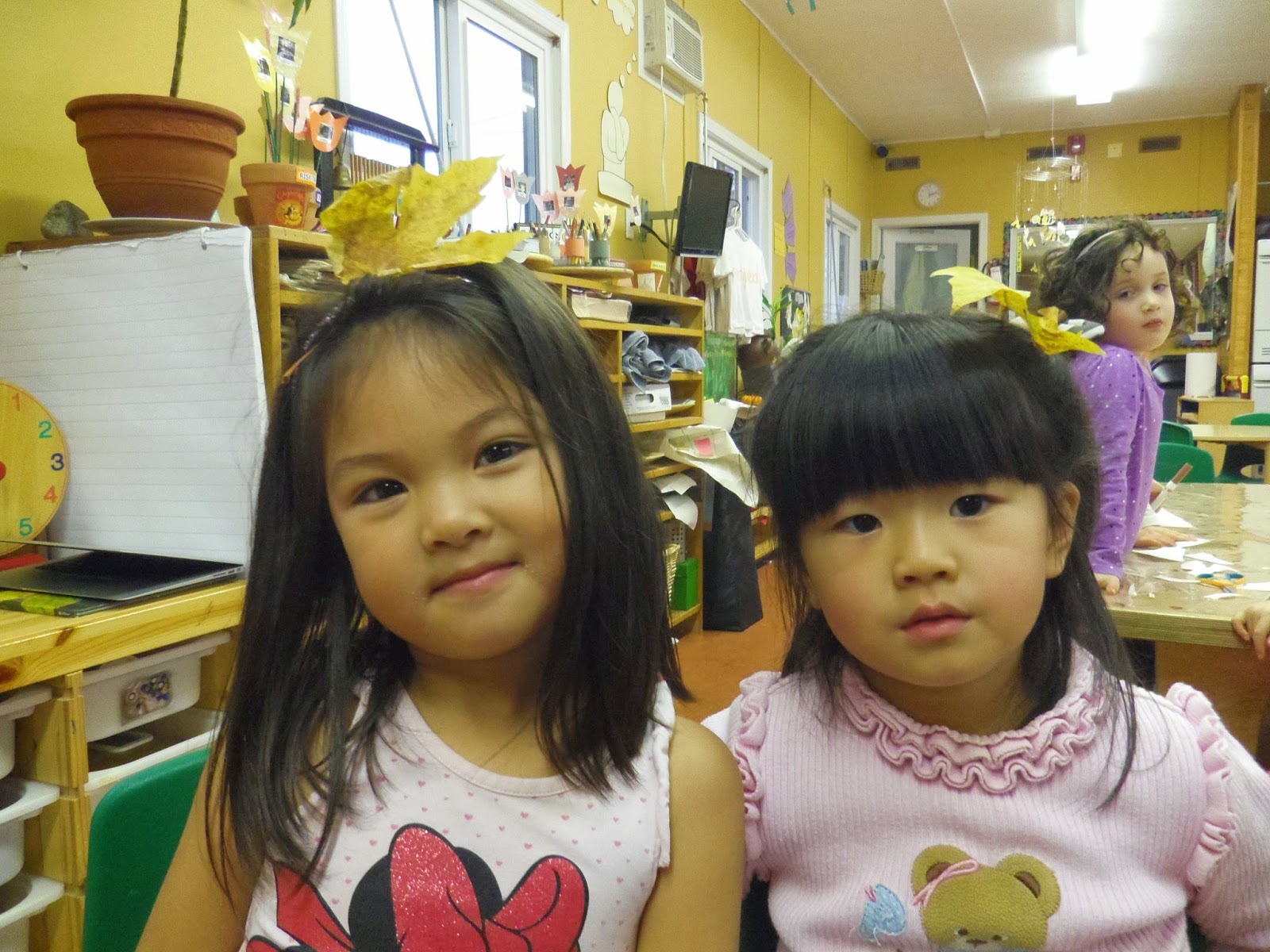 "we found a yellow leaf and we put it on our heads" "The lightning is red, a primary colour" primary colour collage During our morning free play the children noticed how the fallen leaves are mostly yellow, brown, and some orange.  This sparked the idea of looking at colours in nature outdoors.  To follow through  this interest I showed them various photos of outdoor landscape, weather, and natural phenomena and  were asked to identify the primary colours they see in each photo.  In our discussion, I observed how the children are beginning to be more descriptive with the colours they see. Their words can almost spun like poetry. Here are their comments: Nico: The red is hot like fire. William: The red lava is hot (pointing at the picture of an exploding volcano)  Eva: The red is like fireworks. Matthew: Yellow is the lightning. It's like electricity.  They are also beginning to compare the colours they see (dark vs light colours)
1 comment
Read more 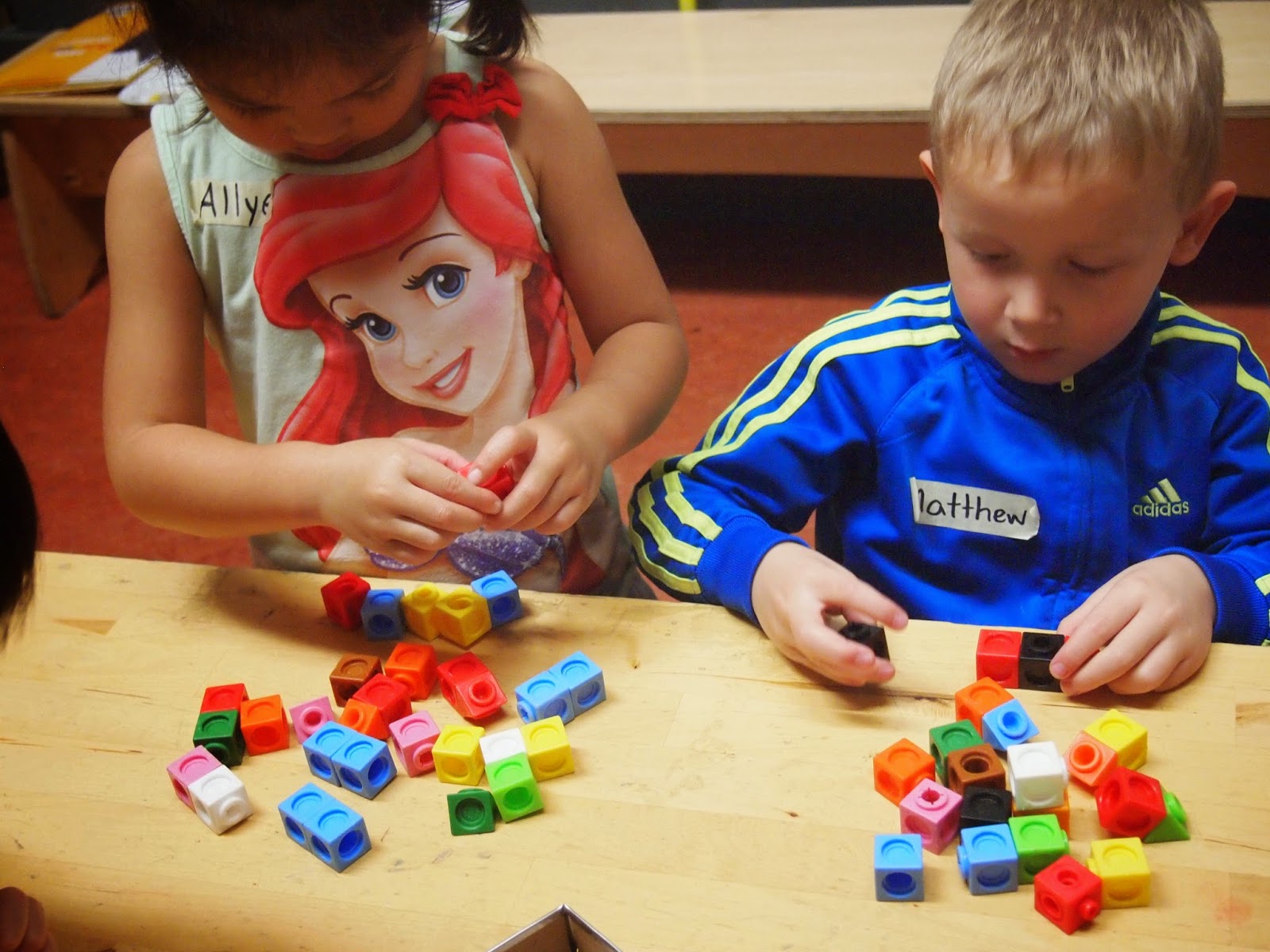 Formative week: colours are all around us 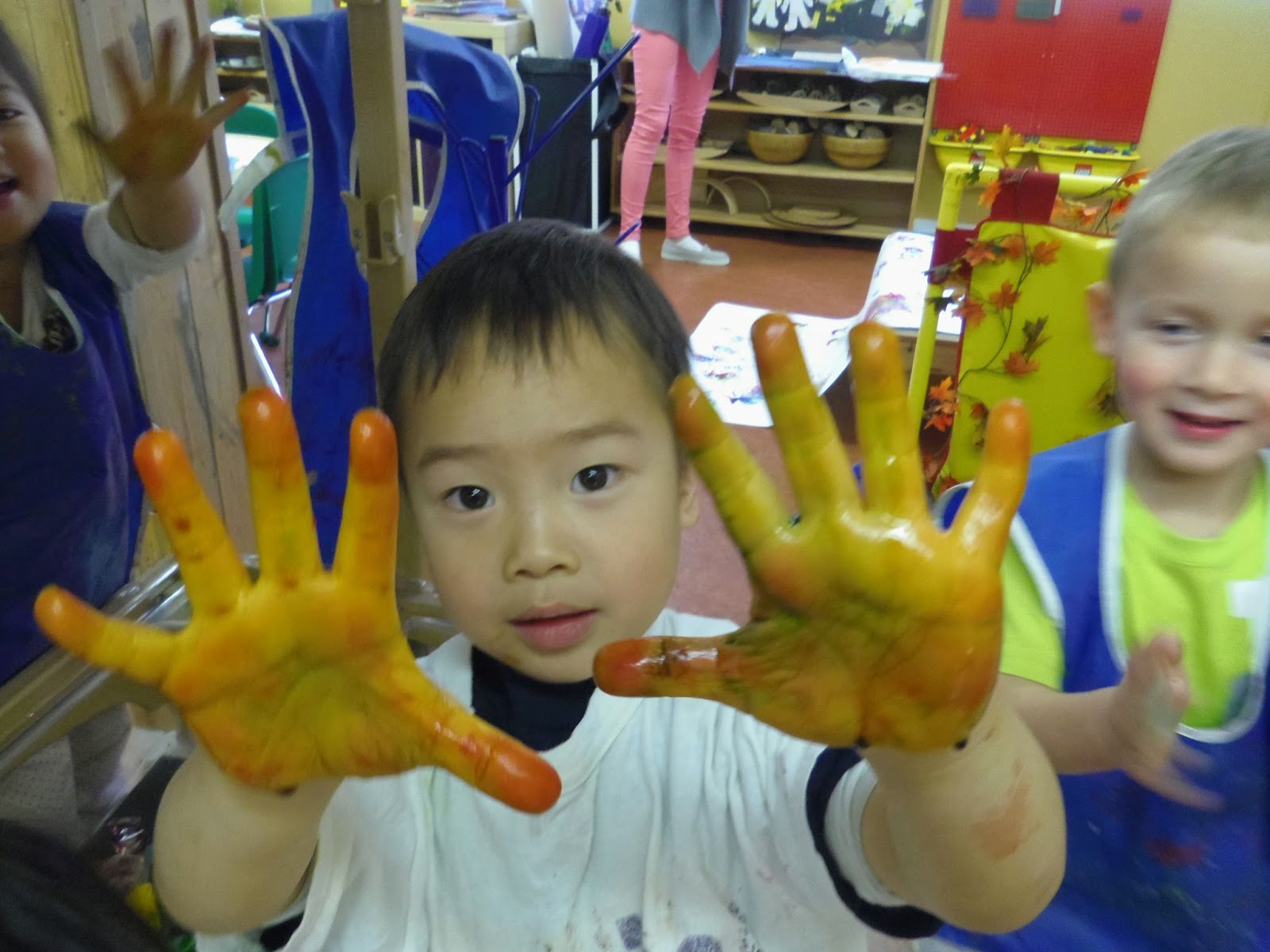 "Look, my hands are orange and green!" mixing colours using coloured ice "I made green with blue and ...something" In this formative week the children began exploring colours through a hands-on experience of coloured ice. The intent was to initiate some thinking and spark conversations/comments about what they notice in the colours as they play. Here are their questions and comments: Matthew: why is my hand brown? I only used this colour? (Pointing at red and yellow ice cubes) Eva/Zoe: hey, it's Like a choo-choo ice train. It's like a rainbow train!! Alley: you know, when I touched the yellow and blue I made green....I want to make purple! We also began to discuss the different colours we might notice outside in Nature. The children helped me illustrate an outdoor landscape. They chose something that is part of nature and described the colour they want it to be. Nico asked for a purple horse.  Matthew wanted 2 snowy mountains with a go
1 comment
Read more
More posts

kathryn
Thanks for checking out grouptime activities. I hope this inspires you to learn and explore wonderful ideas and concepts with your children.